The Piano in Poland

The oldest surviving Polish grand piano is a 1774 square piano made by Ignacy Skurski from Sandomierz (although there are records of even older instruments). Skurski (previously spelt Skórski) built the piano for a Benedictine nunnery of his own materials in only 3 weeks. Also surviving is the contract stipulating the commission's terms, which sates: Should I fail to perform […] the contract […] or perform the work differently than specified beforehand, or still perform it badly or poorly, I may be arrested and held accountable for non-fulfilment of this contract, to which I agree as proved by my signature. The cost of the work was 72 Polish zloty. The instrument (MDS-1334) is currently kept at the Diocesan Museum in Sandomierz.

The 19th century was the heyday of the piano-making industry in the Polish lands, with numerous piano companies operating in Warsaw, Kraków, Kalisz, Vilnius, Lviv, Poznan, and other cities. The busiest of all was the capital of the Congress Kingdom of Poland as well as the town of Kalisz. The great number and high activity of Polish piano firms may be downright surprising, yet one needs to remember that at the time pianos were in general use. With the arrival of the 20th century, many of the firms declined, while many others collapsed during the first world war. The final blow came with the outbreak of World War II. We are, nevertheless, left with a testimony the Polish piano industry's prime time – the instruments.

Collections of historical pianos – Polish and foreign – may be found in many Polish museums. The Musical Instrument Museum in Poznań holds a significant collection of such instruments, while many general museums possess individual models. There are only two collections – one established a few decades ago in Bydgoszcz (now housed in Ostromecko), the other in Opatówek – focusing entirely on historical Polish pianos, with foreign-made instruments being held only for reference purposes. The idea behind establishing these coherent and well-thought-out collections was to give testimony to the successes of Polish piano industry and make it possible to compare the accomplishments of Polish piano makers with those of their international counterparts. 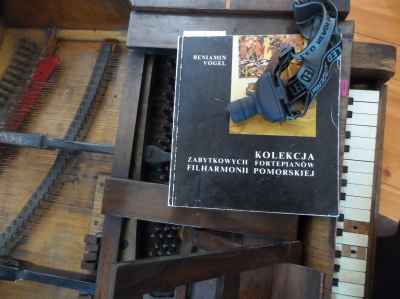